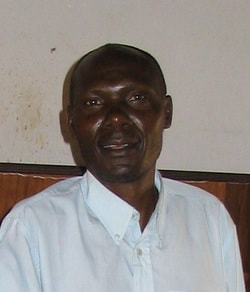 The Soko Fund was named in honour of Mr Yesaya Soko, a former teacher at Bandawe Girls Secondary School. Despite major obstacles, including money and distance, Yesaya finally gained his B.Ed Science degree in 2003, having travelled hundreds of miles over several years in order to complete his studies. It was his determination, persistence and profound faith in the value of higher education that encouraged the founding Trustees to pursue the idea of establishing The Soko Fund. Now a headteacher of a large secondary school in Malawi, Yesaya has been an advocate for the power of education ever since.
​
Lindsay Graham, Co-founder and Director
After graduating from the University of Edinburgh, Lindsay first went to Malawi in 1999 to teach at Bandawe Girls Secondary School in the northern region of the country. At Bandawe, Lindsay taught many bright and able young women, and was impressed by their determination to learn, despite such few resources and opportunities. On returning to the UK, Lindsay studied a Masters’ degree in Education and International Development at the University of Leeds and became increasingly interested in the power of education to improve lives. This led her to establish The Soko Fund, along with her Co-founder, Gordon Graham. In 2003, she established the partnership with UNIMA, and Leonard Kamwanja, enabling The Soko Fund to offer its first Soko Scholarships to two young women studying to become teachers. Fifteen years later, Lindsay is responsible for managing The Soko Fund’s activities in Scotland and Malawi, working with four partner universities, seven partner secondary schools, 60 Soko Scholars and the Soko Graduate Association (SGA).
Professor Leonard Kamwanja, Soko Fund Representative in Malawi
Leonard has been involved with The Soko Fund since it was founded 2003. Prior to retirement, he was Pro-Vice Chancellor of the University of Malawi. In this position, he ran the Pro-Vice Chancellor’s hardship fund, which supported students struggling at university. Leonard supported the start of The Soko Fund by helping to identify women who would have had to leave university without the financial support the Soko Scholarship could provide. Thanks to his interest and support, Soko has grown from the two education students that Leonard identified at Chancellor College to supporting 60 students each year and working with four different universities. Leonard advises The Soko Fund on all aspects of its work in Malawi and coordinates the biannual award ceremony. In recognition of Leonard’s considerable contribution to Soko, we will be launching The Leonard Kamwanja Award for Excellence in 2019. This Award will be given to the Soko Scholar who has achieved the highest distinction in each year of study.
Nancy Chimalizeni, Soko Graduate Association (SGA) Coordinator, Soko Malawi
Nancy was supported through university by a Soko Scholarship and gained a BSc in Business Administration from the University of Malawi in 2015. After graduation, Nancy was struggling to find out about employment opportunities. When she heard about the Soko Graduate Association (SGA) being launched she came along and signed up. As part of their first year, the SGA initiated a system, using social media, of informing the members of any employment opportunities available in different regions of Malawi. Nancy had been searching for a job for a few months when she joined the SGA network. Through the network, she learned about a position at JTI ltd, as a Leaf Technician, supporting tobacco farmers with best agricultural labour practices. With help and advice from the SGA she got an internship and then was offered a permanent position. After marrying in 2017, Nancy had a baby girl in 2018. Unfortunately, her employers did not have a system of maternity leave and she was unable to retain her job. Therefore, she was looking for work experience and became the SGA’s first intern, supporting the coordinator and undertaking the monitoring and evaluation of the organisation. In 2019, Nancy was appointed as Coordinator and we are delighted she has joined the team.